Directed by Alan Clarke and broadcast on February 10th 1981 for the BBC, in England, as part of the Play For Today series.

Another of Alan Clarke’s work for television. This one was produced at the beginning of the 1980s during the period where Clarke began to be recognised internationally for his work.

The teleplay itself tells the story of a corporation who decide to outsource one of their contracts to the U.S.S.R. during the Cold War. As they work with politicians on both sides of the table to keep the story out of the press, they also try to keep the contract amid the negotiations.

It plays out through a barrage of gruelling meetings between the two companies on both sides of the table, and unfortunately it becomes a bit tiresome to get through after a while.

The story that’s being told is being done so quite well by both Clarke through his direction and the list of actors who all play their parts quite well. And while the story is quite interesting I didn’t really feel engaged as I have with much of Clarke’s other works. I think this was in part due to the rigidity of the meetings which make up the entirety of the film.

Having said that, it is a very interesting tale about how greedy capitalist chairpersons of corporations do their best to keep politicians in line in order to secure contracts which will make them lots of money. Doing so even at the expense of a) their workers, and b) the people of countries which their actions ultimately end up effecting. These themes of nuclear obliteration and the capitalist/socialist divide are quite strong throughout the film. Many of the characters profess their capitalist ideas while those on the Russian side try to keep their socialist ideologies intact throughout the negotiations. There’s even a reference to Albert Einstein near the end, quoting that there may be a winner of a third ‘World War’, but there most certainly will not be a fourth.

As the credits suggest the film is based on a book by Canadian author Charles Levinson entitled Vodka-Cola. After a bit of digging, it turns out that Levinson was a trade unionist and spent much of his life fighting against multi-national corporations. Other books he wrote include works on inflation, the pharmaceutical industry, the relation between plastics and cancer, as well as chemical warfare. Fascinating stuff and it doesn’t leave much room to wonder why Clarke chose to work with this particular piece for one of his films.

Directed by Alan Clarke and aired in its home country of the UK on television on June 13th 1967.

A short half hour piece by Alan Clarke done for British television which tells the story of a visit by a man from the social (the welfare office, the dole, etc.) to a man with learning difficulties. The man who lives at home with his brother, has just quit his job the week prior. The film descends into chaos when the older of the two decides to give the man from the social a bit of a scare.

It gets even crazier which is something I most certainly wasn’t expecting but welcomed wholeheartedly especially as it allows the viewer to really look into how Clarke directed the three actors in the piece. All three actors give wonderful performances but the the way in which Clarke’s camera gets up close and personal with the characters and really lets us into the action is something I’m sure was looked at with great regard by Clarke’s peers at that time.

The highlight of the short half hour piece in my opinion is when the older brother heads out to buy a pack of cigarettes (presumably to mock the man from the social, i.e. the man spending the money he gets from the social on a pack of cigarettes – this would be frowned upon by anyone from the upper classes) leaving the younger and mentally-handicapped brother alone with the man from the social. The lack of music, which I’m beginning to think is a trademark for Clarke, really builds up the tension between the two characters and provides a welcomed break from the dialogue-heavy action.

Being one of Clarke’s earlier films, of which I haven’t yet seen that many, it’s interesting to see how his knack for directing still managed to shine through even so early on his career. Many of his other works are indeed much better and more thawed out than this one, but for any fan of Clarke’s it’s definitely a must see.

To Encourage The Others

This review does contain spoilers.

An absolutely harrowing tale about two youths who are caught on the rooftop of a building, one of whom has a gun. The younger one, the one with the gun, shoots and kills a police officer and wounds another. This of course all happens while the older one, a quiet, dyslexic, and described as having the mental age of a child, stands watch already arrested by the police. After bustling the two teenagers back to the station, the officers seem to concoct a story which incriminates both the shooter and the older suspect in the murder of the policeman.

What follows is at times trying to get through, but with the film being 90% courtroom drama what can you expect? Of course this was what I wasn’t expecting about the entire film. But this is a useful tactic by British directing genius Alan Clarke, in that it gives you a glimpse into what the real tragedy of this story is: the political aspect of it.

I can’t say much more really without giving too much away because if you do go and see this film or research the story you will find out for yourselves, all I need to say is that it is a very political film about a story of which you need to know – one of the final cases of capital punishment in the history of the United Kingdom.

Another of late director Alan Clarke’s great filmography, this film is a really heartbreaking tale of one teenager’s life which is turned upside down in part by his friend, but for the most part, by the system which failed him and many others like him.

Interesting to note that there was another adaptation of this story in 1991 entitled Let Him Have It starring Christopher Ecclestone and Tom Courtenay as the two teenagers. I’m yet to see this version.

Directed by Alan Clarke and released in it’s home country of England in 1982. 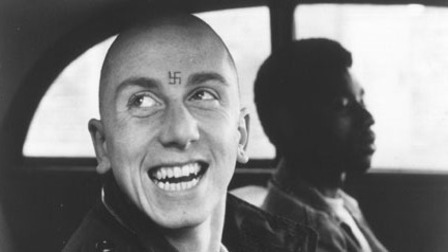 An essential film for any Brit to watch. Every piece of dialogue is hard hitting and as brutally honest as any film about the culture of this country should be. Despite being incredibly relevant when it was made, this is so much more relevant to today’s society. The pivotal scene in the room with the chalkboard will go down in my eyes as one of the most powerful scenes in British cinema. Tim Roth’s performance is incredible and his best performance by far.

Alan Clarke will always be the best British filmmaker for me, from the late ’60s he produced brutally honest films, even when injected with humour (see Rita, Sue & Bob Too), eventually his honesty got him banned from TV (see Scum). Finishing his career with the gritty and uncompromising Elephant (one of my favourite films of all time) was the best way for him to go. Easily the best British filmmaker, any Brit needs to watch everything he’s done.

Directed by Alan Clarke, and broadcast on the BBC in 1987 as part of it’s “Screenplay” series.

Alan Clarke is one of celluloid’s greatest assets. It’s funny because he made a dire amount of theatrical feature films and just over 60 films for television – mainly the BBC and his television work far surpasses his theatrical work even though Scum, The Firm and Made In Britain are all fascinating works that showcase his exquisite talent and masterful directing abilities. You don’t get much better than Road though.

Broadcast on TV in 1987, Road is an adaptation of the famous first play of Jim Cartwright and it shines through unequivocally throughout the 67 minute run time. The characters walk through the streets addressing the camera as if they are on stage but they’re not. In cinema it’s sparsely done but imagine sitting down to watch a serious drama on TV and the characters start talking to you – also good bear in mind this was in 1987, a time in England where the streets were still rife with racism and political opposition among other things.

The musical number that closes this is quite frankly among my favourite musical numbers in the history of celluloid – I say celluloid because it’s hard to say film when it was made for and broadcast first on television.

Regardless, Road is a masterclass of acting and the ever so powerful direction of Clarke. I’m desperate to see everything I can get my hands on by the man now because he’s easily one of my favourite filmmakers of all time.

Directed by Alan Clarke for British television and first broadcast as part of the “Screenplay” series in 1987.

Christine is an incredibly bleak and uncompromising portrayal of a day in the life of a teenage drug addict. Our titular character Christine visits her friends and scores them heroin aswell as scoring it herself.

At 52 minutes it’s an incredible feat for the every day viewer to even sit through this, but as a piece of film it stands out above any other drug drama for it’s realism and it’s incredible cinematography. Clarke films his characters from every angle possible and gets in as much as he can while at the same time letting the actors do as much as they can in the little space they’re given.

The humour in the dialogue takes away from the drug use and not once do any of the characters even mention drugs or the drug in question. Reality does kick in however when Christine asks one of her friends “You alright?” over and over again as they delve deeper into their drugged state.

There’s nothing special about these characters and Clarke emphasises that as well as doing absolutely nothing to say that living a life like this is in any way “good”. As a great filmmaker should, he simply presents the facts as they are.

Obviously staged, it’s ridiculous to say that this isn’t an incredible piece of cinema. All in all Clarke has created another brilliant film, and this one is a really stark depiction of drug use that just… stays with you.